Traditionally undetectable contaminants such as plastics and glass shards can now be detected—enhancing your brand, reducing costs and increasing customer safety. 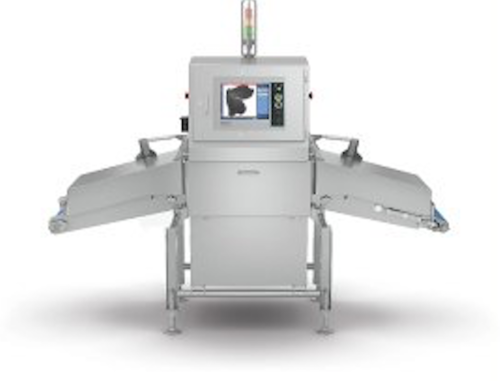 One of our key strength is service and parts support. Our full team now consists of 50+ Canadian employees not counting contractors. We have unmatched support in Canada (11 technicians in total, 6 in the GTA) and all parts come from our office in Toronto (over $425,000.00 in inventory!). We offer a 24-hour guaranteed access to parts and technicians. We also offer service contracts and can support you for both X-ray, metal detection and check-weighing.

Eagle PI is the world manufacturing leader of X-ray inspection systems. With over 45 years of X-ray manufacturing experience and more than 45,000 systems installed worldwide, the technology behind the Eagle system offers a tremendous amount of advantages over the competition. We have a large number of installations in food applications:

However, with MDX technology from Eagle, traditionally undetectable contaminants such as plastics and glass shards can now be detected—enhancing your brand, reducing costs and increasing customer safety. MDX Technology discriminates materials by their chemical composition (atomic number) which is essentially valuable in difficult or “busy” images that contain high variations in image density.

We offer comprehensive and flexible product reclaim services which can be easily adapted to your specific needs. Our complete range of services includes everything from basic rental services, which run your products through our X-ray machine at your location, to 100% turnkey solutions in which we do the product inspection for you at one of our local inspection facilities.

OUR RECLAIM TEAM AND OFFERING
Over the past 7 years, we have built our team primarily around product inspection and food safety, and have now established ourselves as the leading Canadian company for both Metal Detection and X-ray Inspection technology. We sell new systems, as well as offer emergency reclaim inspection services.

Our reclaim services are very flexible and can offer any level of inspection you require such as:

You provide the labour

Only applicable to a small quantity of products

You provide the location and labour

We provide the X-ray system, a senior technician and labour

You provide the location only

We provide the X-ray system, a senior technician, labour and location

There is no need for you to do anything

Just tell us what you need and we will make it happen!

Offering the utmost in versatility when it comes to weighing a wide variety of package types and configurations, no matter what your environment.

ALPHA CHECKWEIGHERS, a division of the ALL-FILL CORPORATION, has been building precision, dynamic checkweighers since 1987. As an acknowledged North American leader in the design and fabrication of precision weighing instruments, ALPHA has become the standard for many food and pharmaceutical based manufacturers that are looking for cost effective and reliable equipment to provide the highest level of product quality and overall cost control. With an extensive range of platforms, ALPHA offers the utmost in versatility when it comes to weighing a wide variety of package types and configurations, no matter what your environment. Integration with a range of metal detection options is becoming a common approach to achieving product compliance and safety in the smallest space possible. The Model EW-8 is Alpha Checkweigher’s economical solution for users and applications that may be new or unfamiliar with the advantages of checkweighing on new or existing filling, feeding, inspection, or other packaging lines. Based on the field-proven line of Alpha Checkweighers, the EW-8 offers the same versatility and reliability as other Alpha models.

The EW-8 consists of a sturdy, tubular frame with a 5” U-channel main support plate that serves as a mounting location for the three belt-driven conveyors and the digital strain gage loadcell. A slope front control console houses the electronics and the color touch screen Human Machine Interface (HMI.) Reject options include Air Blast, Pusher, or Bopper to remove unacceptable weight packages from production.

The EW-8 is operated and controlled from a series of full color, easy to read and use screens on the front mounted touch screen panel. Dedicated screens are provided for all major functions and operations for testing, set up, calibrating, and operating the checkweigher. Useful short term and batch statistics come standard with the CEREBUS IV controlled PW-12. Individual weight or production statistic can be exported via RS-232 or other communication devices. The Alpha HP Series offers several standard features including electromagnetic force compensation weighing technology and an air blast or pusher reject device. The Alpha HP-14 is ideal for accurately weighing packages and containers of up to 4 lbs, 12 inches in length, and 8 inches in width. They can operate at speeds of up to 300 packages per minute with an accuracy of +/- 0.100 grams.

Pouches, bags, and other unsupported or irregularly shaped packages pose a problem to conventional checkweighers that use chains or bands as a conveying medium. Not so to the Alpha HP-14, whose weigh table is rigidly constructed and whose weigh table belt, pulleys, and gearhead drive motor are all balanced to ensure accurate, reliable weighing of flexible packages. A continuous, programmable variable speed conveyor provides constant torque.

All weighing operations are controlled by the CW700 checkweighing systems, which is easy to integrate with date networks. The system features a user-friendly, graphical touch screen and a structured menu and selection designs for all operating functions. Up to 25 different set-ups can be entered for each size, weight, container, or package. There are no confusing programming steps when changing products, sizes, or weights. An exclusive automatic calibration feature determines all relevant operating parameters for optimum accuracy and checkweighing efficiency. For at-a-glance updates, the Alpha HP-14 features a large character weight display and easy-to-see tower lights. The CW-10 model Checkweigher is Alpha’s solution for fast, accurate checkweighing applications. Its simplified, modular design offers the ruggedness and durability for demanding production environments at significant savings, with no compromise in accuracy or weighing reliability.

The Model CW-10’s 12 lb. weighing capacity and line speeds of up to 350 units per minute make it the ideal unit for smaller boxes, bottles, cans, or cartons used in prepared & packaged foods, pharmaceuticals, and chemical products. Useful short term and batch statistics come standard with the CEREBUS IV controlled MW-16. Individual weight or production statistic can be exported via RS-232 or other communication devices.

The MW-16 can be supplied with optional in-feed and/or discharge conveyors to accommodate both new and existing production lines. A variety of reject devices are available to remove unacceptable packs from the line. The innovative drive system used in the Model HW-15 provides an efficient, low noise method of transporting packages over the weighing area of the checkweigher. Motor, gearbox, and bearings are sealed within the shell of the roller operating in a continuous oil bath. Separate drive and components, such as chains, drive belts, idlers, couplings, and pulleys are eliminated. Maintenance and servicing is limited to replacing lubrication oil every 10,000 hours of service (up to 5 years). Since nothing rotates except the drive roller, the possibility of injuries and accidents is reduced.

The HW-15 can be supplied with optional in-feed and/or discharge conveyors to accommodate both new and existing production lines. Reject devices are also available as options to remove unacceptable packs from the line.

Send us an email and we'll get back to you, asap.